Signing of the Contract on the Allocation of Financial Incentive for the Investment Project of the Company Hella Saturnus Slovenija d.o.o., Ljubljana

Ljubljana, 14 March 2014 - Today the Minister of Economic Development and Technology Metod Dragonja and the Managing Director of the company Hella Saturnus Slovenija d.o.o. Christof J. Droste signed the Contract on the Allocation of Financial Incentive for the Investment Project of the Company Hella Saturnus for development expansion and diversification with the aim to achieve global responsibility and increase innovative production processes and introduce new lighting equipment products.

On 14 November 2013, the Government of the Republic of  Slovenia, on proposal of the Ministry of Economic Development and Technology allocated a financial incentive to the company Hella Saturnus Slovenija d.o.o. for the investment project "Development expansion and diversification with the aim to achieve global responsibility, increase innovative production processes and introduce new lighting equipment products" in the amount of 8,110,073.00 EUR. Based on Article 22 of the Decree on Financial Incentives for Foreign Direct Investments, the investment project was applied for by the German - Slovenian company Hella Saturnus Slovenija d.o.o., which is in 100 percent owned by the German group of companies Hella KGaA Hueck und Co., Lippstadt.

The investment project "Development expansion and diversification with the aim to achieve global responsibility, increase innovative production processes and introduce new lighting equipment products" was applied for by a foreign investor, the German group of companies Hella KGaA Hueck & Co., Lippstadt, through its subsidiary Hella Saturnus Slovenija d.o.o.  The Hella Group is an international group of 65 affiliated companies on three different continents. During the years of its existence, the company has been investing in state-of-the-art processes and high technology devices as well as developing innovative products, which have been marketed successfully under the established Hella trademark. On a European scale, it is the leading company in the area of automotive lighting equipment; on a global scale, it ranks among three leading companies in its branch.

The Hella Group has been present in Slovenia since 1997, when it acquired a majority share of Saturnus Avtooprema. Following the strategic connection with Hella, the development and the production of lighting equipment for automotive industry started to increase rapidly, simultaneously with investments in development of new innovative, state-of-the-art technology devices, introduction of new processes and employment of professional staff. One of the noticeable results of investments in the Slovenian company was the opening of a new plant for the production of plastic lenses that increased the company's competitive advantage and growth during the past few years. The Saturnus trademark and its long lasting tradition were already recognised in Slovenia and abroad, mainly in countries of western Europe and former Yugoslavia. Hella Saturnus Slovenija in cooperation with its parent company Hella KGaA is preserving its presence on the existing markets and entering new ones.

In addition, the investment will include various construction work on the existing facility, a change of the production and logistics layout, setup of a clean area for new LED products and re-arrangement of premises for new employees. This means that that the existing space capacities will be re-arranged to new tool shop premises and state-of-the-art technological equipment for technologically demanding LED products.

Timely implementation of the development projects depends on staff reinforcement of single units, especially the development unit. Within the project, a minimum of 34 new jobs will be created, mainly in the area of development and accompanying services in the central Slovenian region. The new job will have to remain in the region for at least 5 years after first employment.

The investment will have a positive effect on local suppliers of materials and semi-finished products in the automotive industry, since their share will increase to over 22%. The share of Slovenian suppliers of services will increase as well, namely to over 20%. Cooperation with knowledge institutions will continue: with University of Ljubljana (Faculties of Mechanical Engineering, Electrical Engineering, Mathematics and Physics), University in Maribor (Faculty of Mechanical Engineering) and Jožef Štefan Institute in Ljubljana in the area of research and development as well as transfer of know-how from theory to practice.

The value of the investment project is estimated at 27 million Euro or a minimum of 21.6 million Euro for a period of three years.

External influences of the investment project on Slovenia during the period from 2013 to 2016 are estimated at 214.84 million Euro; they comprise labour costs, profits tax, services within the Republic of Slovenia (electrical power, telecommunication services, education, insurance, fuel) and purchase of Slovenian products. 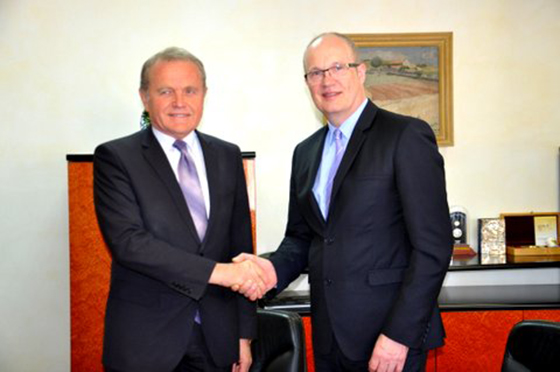 Completion of the investment is foreseen on 31 December 2015; according to the stipulations of the contract, the investment must be preserved in the region for five years.

Slovenian companies at the Automechanika Istanbul

The debate was about challenges for slovenian automotive suppliers

Slovenian suppliers will be presented to the Russian AvtoVAZ